Memorial Sculpture: By Artist or Committee?


I seldom mention sculpture here because I tend to restrict subjects to those that I've dabbled in. The last serious piece of sculpture I made was done when I was 14 years old; I hope that explains my lack of strong interest.

That aside, there are matters sculptural that need to be raised now and then. For instance, the problem of public sculptures memorializing people or events. The main problem here, in recent times, lies in the conflict between the modernist-biased Art Establishment desiring sculptures to follow modernist aesthetic principles and the desires of the general public which, on average, has tastes that favor tradition representation. A lesser complication has to do with politics, as we shall see below.

Given that monumental sculptures are expensive to create, their cost is typically borne by public funds, a rich donor, or a public subscription of voluntary donations. The process sometimes includes competitive submissions of proposals and in most cases probably involves appointment of a committee to select the sculptor and the design. The last factor is why I'm inclined to give the committee more credit than the sculptor for the final result, especially work works completed over the last 50 or so years.

Here is food for thought. 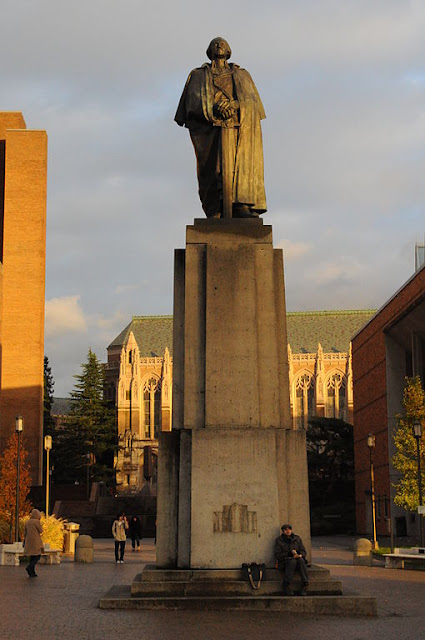 George Washington on University of Washington Campus
Sculpted by Lorado Taft, 1909. More information about this respectful statue is here. 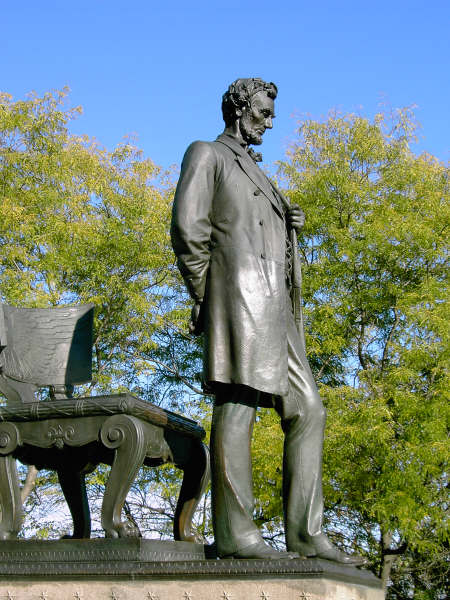 Standing Lincoln (Lincoln: The Man), Chicago
By Augustus Saint-Gaudens, 1887. Illinois was Lincoln's home state, so Saint-Gaudens, one of America's foremost sculptors at the time, was an obvious choice. The Wikipedia entry on it is here. 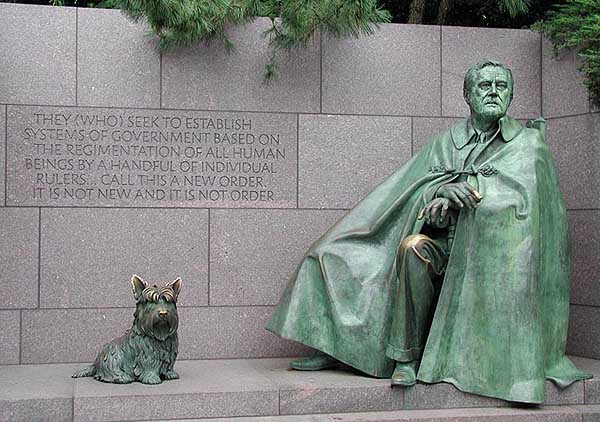 Franklin D. Roosevelt Memorial, Washington, D.C.
Details on the entire memorial are here. The sculptor was George Segal and the memorial was dedicated in 1997. 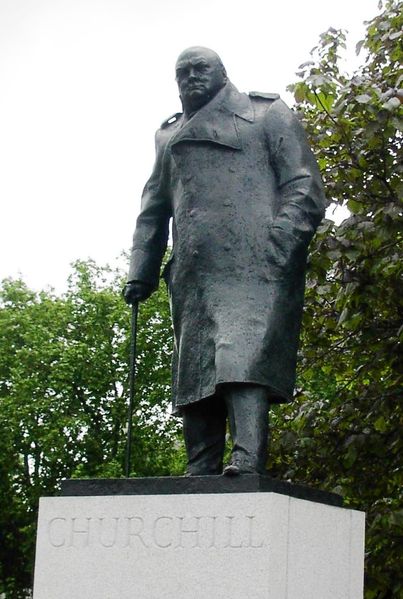 Winston Churchill in Parliament Square, London
The sculptor of this 1973 statue was Ivor Roberts-Jones whose inclination was to mild modernism; more information about the statue is here. Father Damien on the state capitol grounds, Honolulu
This 1969 statue was the result of a competition won by fashionable modernist sculptress Marisol Escobar.
The selection of examples above is tiny, so I won't make generalizations even though it's tempting to do so.

The Washington and Lincoln statues are from an era when such monuments were intended to be respectful and sculptors and committees largely did the best of their abilities to convey that respect.

The Father Damien statue selection apparently was the result of a conscious desire by the committee to be different, to go modernist. I find the cartoonish statue disrespectful of the courageous, selfless man it was intended to honor.

True respect also seems lacking in the Churchill statue. He comes off as a sluggish old cripple (note the cane and how it is shown being handled, especially when viewed from the rear) rather than how he was at the peak of his career during the terrible summer and fall of 1940 when the war came close to being lost. I think members of the committee were not strong fans of Winston.

Jump ahead to the mid-1990s and the Roosevelt statue. The sculptor was a modernist and modernism was riding as high as ever. Yet the statue is as conservatively naturalist as those of Washington and Lincoln. Why? I don't know for sure, but I guess that the committee really, truly wanted to honor and respect FDR and made sure that nothing like the Churchill or Father Damien statues would be found at the memorial.