Even in so-called Golden Ages, the life of a free-lance commercial artist could be a hand-to-mouth progression from assignment to assignment. Sort of like being in show business, one might think. I suspect show biz folks are usually happy when they find themselves in a long-term gig, be it on a television series or a perpetual stint on the Las Vegas strip. And those illustrators conscious that success could easily be blown away by a change in fashion were probably on the lookout for steady work under contract.

Illustrators active in the 1960s when the market for mass-circulation magazine art was going through its collapse often seemed to jump to doing book cover illustrations, portraiture or genre painting on subjects with perennial appeal.

The illustration market in the 1930s was not swooning in the 1960s sense, but times were still tight given that the Great Depression was in full force. Star illustrators such as Norman Rockwell were still doing fine, but middle-rank folks' prospects were less bright. Dropping down to painting covers for pulp-fiction magazines could bring in money, but could easily be a longer-term career-killer in terms of one's reputation in the trade. (This wasn't so much a problem for young illustrators who had yet to establish a reputation; some were able to use pulps as a stepping-stone to illustrating in the "slicks.")

The comic book as we have known it had yet to emerge, but there might be opportunities in the form of newspaper comic strips. Comic strip artists in the first third of the 20th century seem to have generally entered that field via doing other kinds of artwork for newspapers. An exception was Frank Godwin (1889-1959) who, even before the Depression hit, decided to create a comic strip ("Connie") as a hedge against an already declining market for book illustration, one of his main activities. Well, that's my guess as to his motivation. In any case, aside from a period around the time of World War 2, Godwin was doing comic strips up until very close to the time of his death. Illustration work continued, especially during the hiatus in comics work just noted.

Biographical information about Godwin can be found here and here, both sites also containing examples of his work.

In terms of career paths, Godwin was a kind of mirror image of Noel Sickles, who I wrote about here, and Alex Raymond, famed for creating the Flash Gordon strip. Sickles abandoned comic strips after only a few years to become a full-time illustrator whereas Raymond did some illustration work while continuing with comics.

Here are a few examples of Godwin's work: Click on images to enlarge. 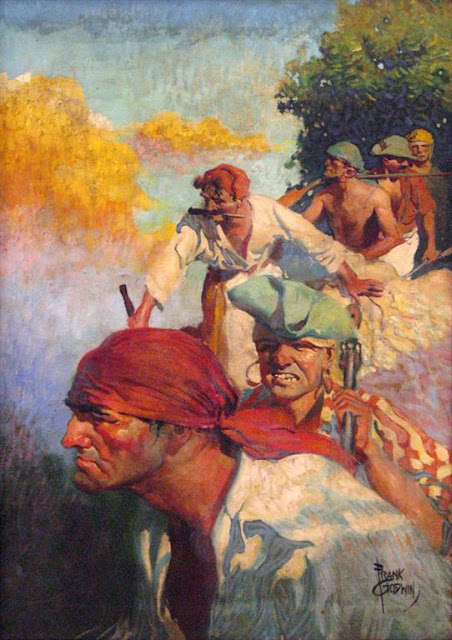 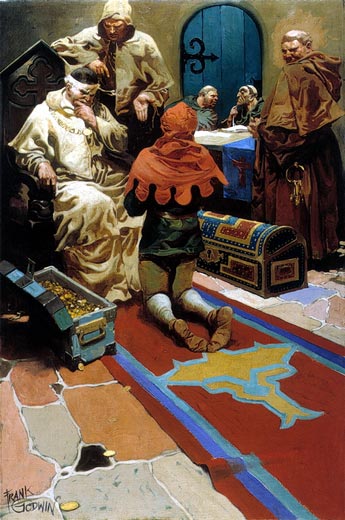 "Abbott Robert of St. Mary's Collecting Rent from His Tenants" - 1932
Above are two examples of Godwin's color illustrations. He also was skilled at pen-and-ink as well as brush-and-black-ink illustrations, techniques popular before 1930. 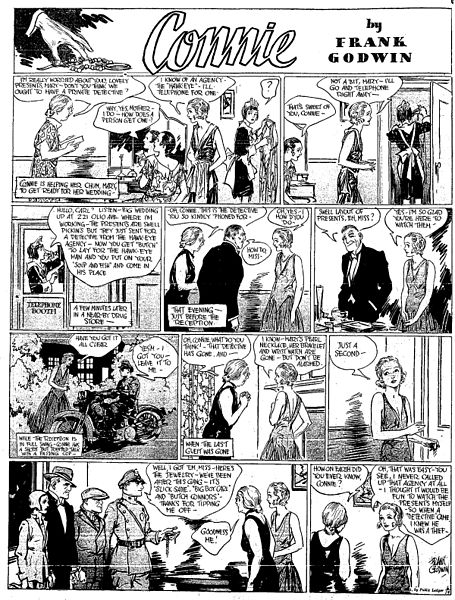 Sunday panel for "Connie" - c.1929
Connie started as a domestic strip, but evolved into an adventure comic and eventually went on to science-fiction in the Buck Rogers and Flash Gordon mode. From the characters' hairdos, I'm guessing that the panel above was from around the end of the 1920s.

Texaco advertisement - 1941
Godwin did a series of ads for Texaco in which his name was prominently featured.

"Rusty Riley" daily panel - 1956
Rusty was his longest-running strip, appearing both daily and Sunday. The daily panels were printed black-and-white, so Godwin was able to incorporate his skilled pen work for shading, tedious though that might have been at deadline time. The Sunday panels were printed in color, so such shading wasn't really necessary and Godwin did less of it.
Newer Post Older Post Home