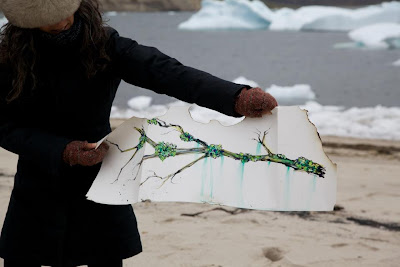 As climate change brings forests to Greenland, so will it bring the forest ecologies of forest fires! Photo by Lisa Forman, with collaboration with the astounding members of the Chasing the Light Expedition (see the FB page!)
Forest Fires of  Kalaallit Nunaat
I created 2 simple ink & watercolor paintings, each of a driftwood stick with Greenlandic lichens.  One of them traveled with a different group to the scientific camp NEEM, which is further north and on the top of the Greenland ice cap.  There, its paints were partially dissolved in glacial meltwaters there and photographed about the base.  The 2nd painting is its companion, traveled with the Chasing the Light Expedition, and was also partially dissolved in glacial waters, where more green paints were released.  Like its companion painting, my hope is that they evoke the "greening" of the polar landscape, and its advance northward along the Greenland ice, from Disko Bay towards Thule. Both paintings were later partially burned by my collaborators.  Why?  If forests do advance into Greenland, eventually normal forest ecologies will be established on this currently treeless "continent-island"-- which would include the normal forest ecological cycles of forest fires.  These two "twinned" artworks will be iidentified by their GPS locations, be framed and shown together in future exhibitions, and be shown along with photographs of the artworks placed on a Greenland beach and in the NEEM research station.
Newer Post Older Post Home