Once upon a time that ended in the late 1960s, road-racing cars looked somewhat like something one could buy from a dealer and drive away on the streets. I'll set aside so-called stock car racers and not even consider Formula types and deal with Le Mans type racers. (Here is a link containing further links to winners of the Les Vingt-Quatre Heures du Mans; click on those links to view photos of some of the winners.) 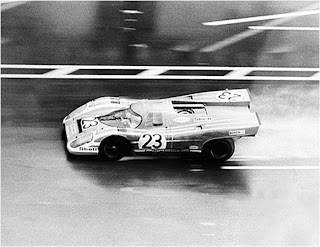 Above is a Porsche 917, the type that won Le Mans in 1970. It marks the start of Le Mans winners shaped unlike anything one is likely to drive on a street aside from a rare "supercar" -- an extremely low-production sports machine costing many hundreds of thousands of dollars.

One of the nicest-looking winners in the post - World War 2 period was the Jaguar C-Type that won in 1951 and 1953. I'm not sure that racing C-Types were street-legal, but it's easy to see that a street version could be built with suitable additions and deletions that wouldn't change its appearance much.

Below are two photos of the beauty. The first shows it in action, the second is of a restored or perhaps replica version. 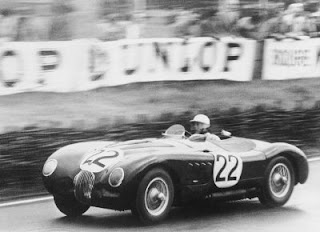 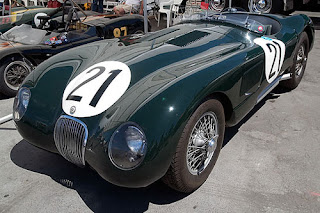