It's too late. The exhibit closed and all that remains is this book which served as a catalog. But for once I lucked out and happened to be in Southern California while Franz Bischoff's paintings and painted vases were on display at the Pasadena Museum of California Art.

Pasadena is an opportunity-rich zone when it comes to art museums. The Huntington Library and Norton Simon hog the limelight, so I wasn't even aware of the PMCA until I noticed someplace on the Internet that a Bischoff exhibit was there. Bischoff's paintings seem to be mostly in private collections or art galleries, so it's a rare treat to be able to view a significant number of them. PMCA teamed with the Irvine Museum (probably the center of gravity for California Impressionism) and between the two were able to tease out enough of Bischoff's work to fill three rooms.

Franz Bischoff (1864-1929) was born in the Austro-Hungarian Empire and emigrated to the United States when he was 21. He worked as a porcelain decorator in the Midwest, eventually becoming famous in that field and gaining a certain amount of wealth through his work and a line of glazing products he developed. Intrigued by California, he eventually moved to Pasadena's Arroyo Seco (fancy Spanish for "dry gulch" -- not far from where the Rose Bowl stadium now stands). Once there, he took up easel painting.

He painted a few scenes with people, more of flowers, but focused on landscapes. In my judgment, he was very good at capturing classical California. Perhaps he was even the very best at it, though there were some others in his league who I'll present in future posts.

As for his technique, he tended to combine a basic color for an area, be it in light or shade, with bits of complementary color and perhaps some other hues. This approach was current in the early 1900s -- the illustration work of N.C. Wyeth followed this practice, for example. The result is a rich, interesting surface.

Also, Bischoff seems to have been careful in his selection of paints and how he used them because the examples I saw at the exhibit were in good condition with no apparent color deterioration.

Here are some Bischoff paintings:
Gallery 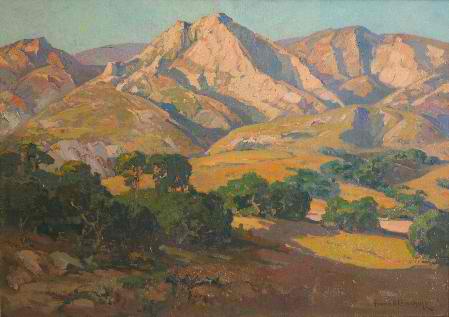 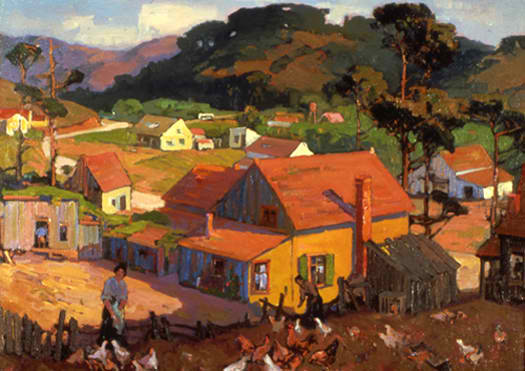 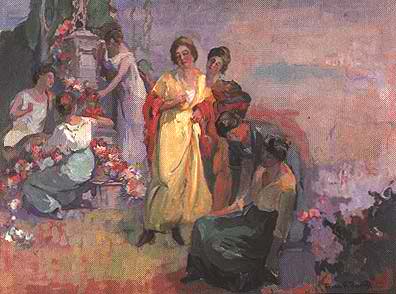 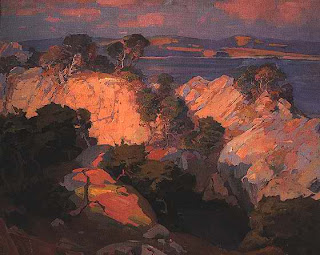 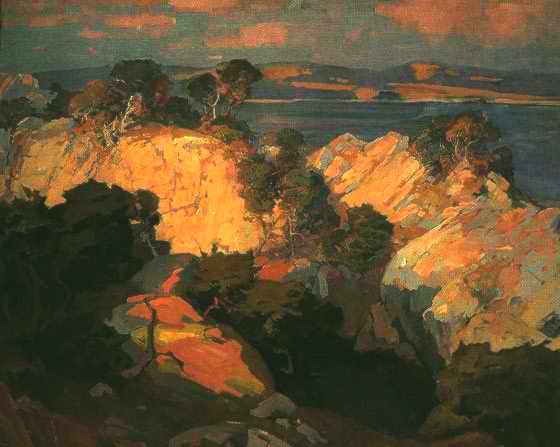 Carmel Coast
This was a highlight of the exhibit. Unfortunately, the original image I downloaded (top) distorts the painting's colors towards red-orange. I couldn't find a better image, so the lower image is my attempt to adjust it to be more like the original. 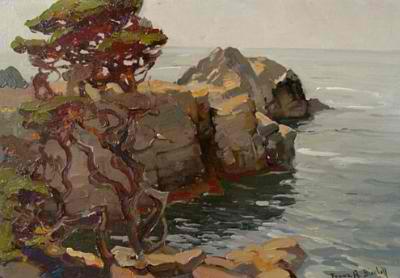 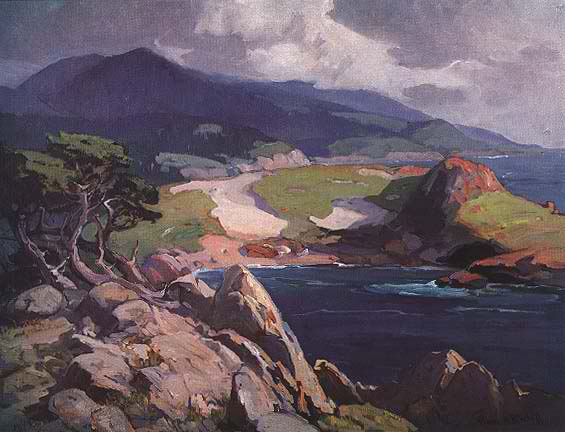 Cypress Point
Bischoff didn't paint the Carmel area until the 1920s. The light there is usually more subdued and misty than along the Southern California coast and interior where he began doing landscapes. 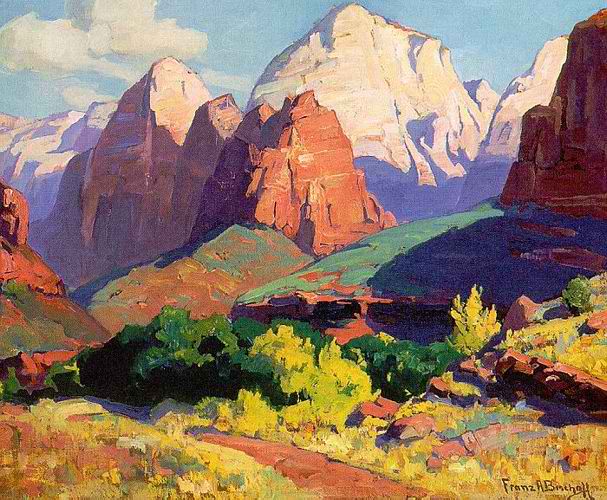 Zion scene
Bischoff's Utah paintings were done near the end of his career. They are simpler than his earlier work, perhaps influenced by the artistic zeitgeist of the late 1920s.