Lovis Corinth, Before and After 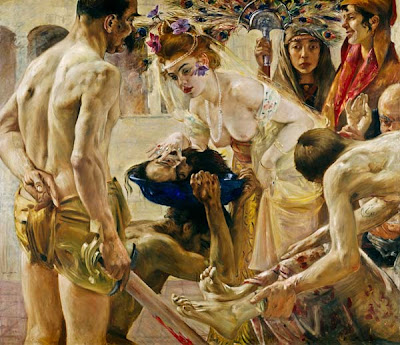 For a case in point about the notion that "timing is everything," consider the German painter Lovis Corinth (1858-1925 -- Wikipedia entry here).

He suffered a stroke 11 December 1911 at age 53. Before the stroke, his paintings tended to be bold and sometimes outrageous in terms of subject matter. Afterward, stylistically they appeared more "modern" and the subjects were more conventional.

Modernism had been making inroads in the painting scene, strongly in the previous decade. So by the time Corinth had recovered enough to resume work, his new style was acceptable -- something that would not have been the case 50 years earlier.

This recent book was created in conjunction with an exhibit in Vienna's Belvedere museum, possessor of ten paintings by Corinth. One chapter deals with Corinth's stroke and its likely effect on his ability to paint. Apparently some observers believe that he would have changed in style to follow the new, modernist trend. But the chapter's author, Hansjörg Bäzner, a medical specialist, presents evidence that Corinth indeed was impaired, especially for the first few years of his recovery.

The name "Lovis" is unusual, and it happens that it was not his given name, but one he assumed later. His actual name is Franz Heinrich Louis Corinth. Where did "Lovis" come from? I haven't been able to find out from sources handy to me, though I understand that he wrote autobiographical works which might offer an explanation. So let me propose an hypothesis. In Latin, the letter "U" was often carved as "V" and "v"s were pronounced as "u" or "w." So it's possible that Corinth simply took his given name "Louis" and substituted a Roman "v" for the "u" for something distinctive. And had he been Swedish, the change in letter wouldn't have altered the pronunciation much.

To illustrate the change in Corinth's style, I present some self-portraits from before and after the stroke. The painting at the top of this article is his Salome for 1900 that helped launch his career in Berlin. 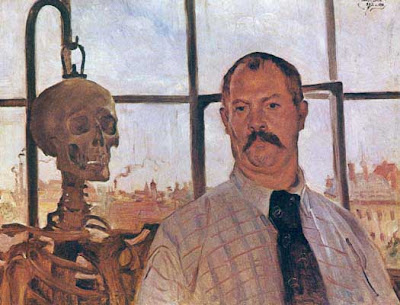 Self-Portrait with skull - 1896
Corinth was a modernist even in pre-stroke times when it came to subjects. Inclusion of the skull might have been Symbolic -- or perhaps simply an attention-getting ploy. 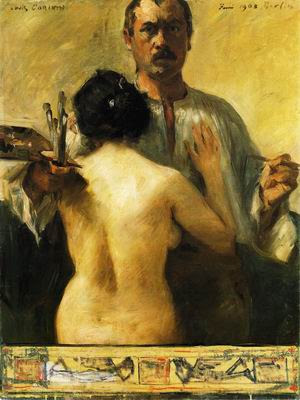 Self-Portrait with Model - 1903
The same might be said for this unusual pose. 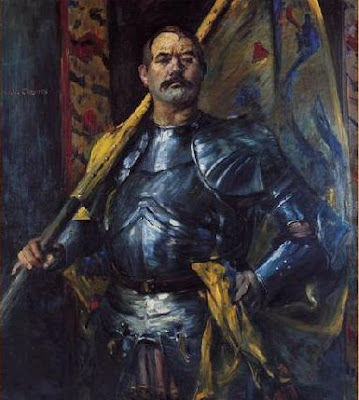 Self-Portrait in armor - 1911
Completed the same year as his stroke, this painting shows little sign of modernist style. 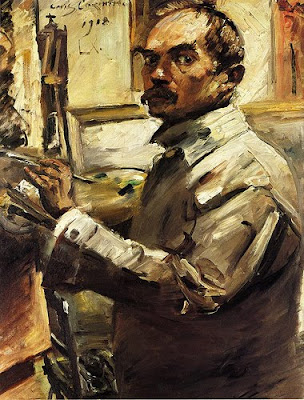 Self-Portrait - 1918
This was done six or seven years after the stroke, by which time he had recovered considerably, but not fully. Note the bushy eyebrows and compare to those of the executioner in Salome, above. Was Salome's executioner a sly self-portrait? 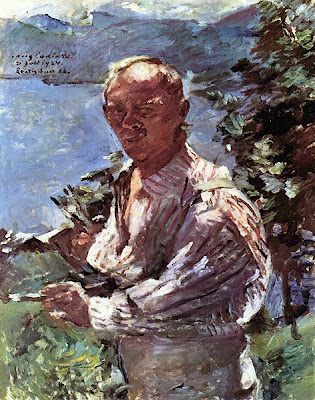 Self-Portrait - 1924
One of Corinth's last self-portraits.