I'm the first to admit that I'm a sucker for 1920s skyscraper architecture. No wonder I've been fascinated for years by a few photos of a huge city-of-the-future (1980) model constructed as the backdrop for some scenes in the 1930 movie "Just Imagine."

This is what I'm talking about: 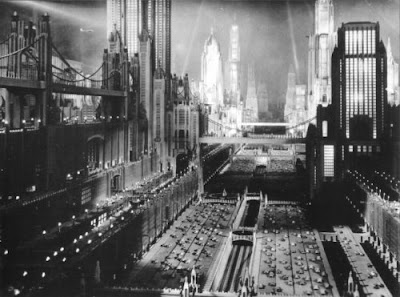 The movie itself is a rather odd combination of musical and science fiction featuring once-popular comic El Brendel, the scrumptious Jane of Tarzan fame Maureen O'Sullivan, and her love interest here, John Garrick. For information about the plot and other details, this is a useful source, and so is the Wikipedia entry here.

I, along with many others, had been informed for years that prints of Just Imagine were lost forever. Fortunately, that wasn't so. Googling will reveal several sources of Internet-based viewing sources as well as where one can find DVD copies -- the DVD offering at Amazon is here.

For your viewing enjoyment, below are some Just Imagine items I pulled off the Internet. 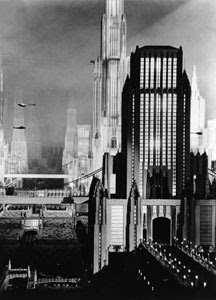 This photo includes tiny models of aircraft that lend believability to the movie. 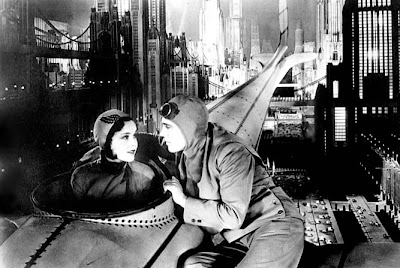 Here's one way the model was used. O'Sullivan and Garrick meet high over the streets thanks to their aircraft being able to hover courtesy of small pop-up wingtip helicopter blades. (Real helicopters here still a gleam in Igor Sikorsky's eye in 1930.) 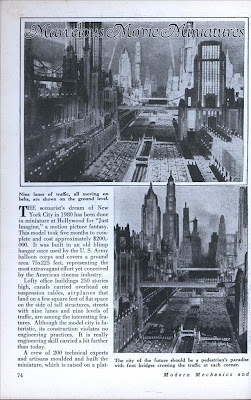 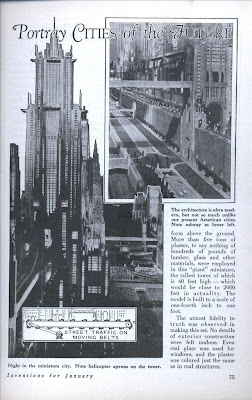 These are pages about the Just Imagine model found in a magazine called Modern Mechanics.

The movie eventually leaves the metropolis for a zip over to planet Mars where three guys (O'Sullivan stays behind) meet the Martian queen played by dancer Joyzelle Joyner, below. 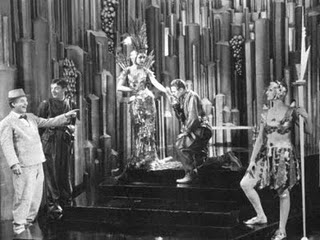 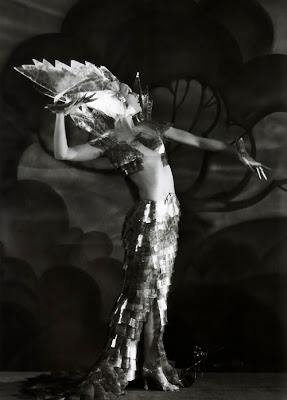 Above is a closer look at Joyzelle.

Returning to the 1980 metropolis, its clear inspiration for Oscar-nominated art direction guys Stephen Goosson and Ralph Hammeras was the architectural rendering of Hugh Ferriss whose work essentially defines the 1920s skyscraper -- real, proposed or even imagined for imagination's sake. Here's an example of a city imagined by Ferriss: 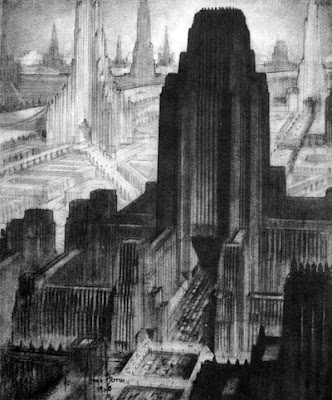 I'll have more to say about Ferriss and his visionary city in a later post.