Ford Motor Company's Lincoln brand has had its ups and downs as this Wikipedia entry indicates. On very few occasions near the end of the 1990s did Lincoln sales top those of Cadillac, its main domestic luxury car rival. And for much of its existence, Lincoln was a distinct also-ran to Cadillac in sales terms.

I haven't time here to explore the entire history of the marque, instead focusing a period of exceptional interest from a styling standpoint, the middle part of the 1950s decade. To set the scene, Lincoln's first post- World War 2 restyling yielded 1949 models based on two basic bodies. One body was shared with the 1949 Mercury. The other, larger body was for the Lincoln Cosmopolitan and unique to the brand. 1952 marked the next complete restyling. The large Lincoln was abandoned and bodies were shared with Mercury, resulting in a comparatively small car at a time when top-of-the-line cars were expected to be larger than average.

1953
This is a mild face-lift of the 1952s. It is an attractive design that was quite modern at the time, especially the low hood feature. Also stylish was the fake airscoop on the rear part of the side. It was a decorative element intended to break up otherwise potentially plain, tall sides. Ford and Mercury also sported fake side airscoops. 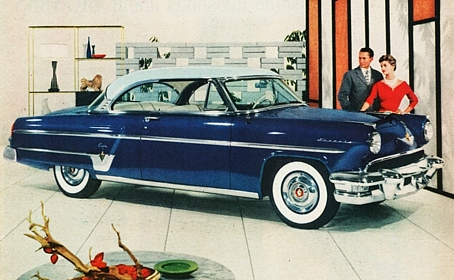 1954
The next model year found the fake airscoop reduced to a bulge, the chrome strip defining the location of the notional air entry point being replaced by horizontal chrome strips intended to make the car seem longer.

1955
To my eyes, the 1955 Lincoln was the last and best looking of its cars based on the 1952 body. The side bulge has been reshaped in a racier manner. Headlight bezels are now extended ahead of the headlamp faces (the term for this was "Frenching"), slightly physically lengthening the car. Further lengthening was due to redesigning the tail-light assembly as part of a rear fender extension. 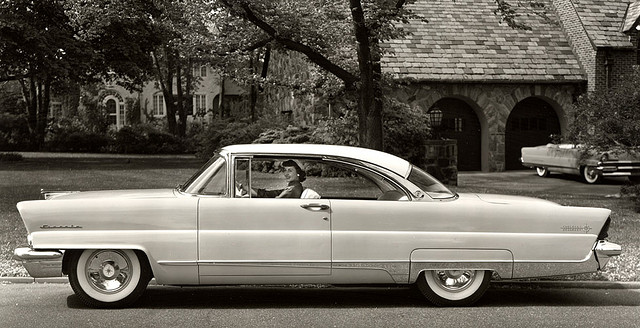 1956
Cadillac came up with a (for the time) futuristic new body design for the 1954 model year. Cadillacs were more squared-off (less voluptuous) than for 1953, but the big styling innovation was the wraparound windshield. It took Lincoln two model years to catch up with this total re-design. The 1956 Lincoln was much larger than in 1955, yet was a clean, attractive design.

1957
Sales of nearly all 1956 model year cars were disappointing compared to record-setting 1955 sales. Lincoln management fought back with a major face-lift even though its restyled 1956s outsold its aging 1955s. I always thought the 1957 facelift was an aesthetic disaster, but the cars sold better than in 1956.

1958
For 1958, Lincolns were totally restyled again, this time being based on a huge, heavy unitized body. The result was aesthetically better than for 1957, but not as nice as the 1955s and 1956s. Sales were down, however.
Newer Post Older Post Home