Something we need to think about when dealing with Modernism is how fresh and different architectural and industrial designed objects appeared when they were new and stood in contrast to nearly all existing structures and manufactured products. Even if these early examples fueled imaginations and desires of some, often the young, proponents faced a hard slog persuading managers to commit money for new construction or factory retooling during the early years of the Great Depression. This required salesmanship, and first-generation industrial designers probably spent considerable time trying to drum up business.

This certainly was true of Norman Bel Geddes who as early as 1932 was able to get his book "Horizons" published, surely as an exposition of Industrial Design as well as a sales tool for his own firm. 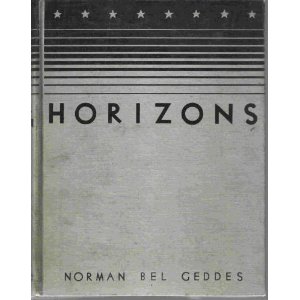 Aerodynmic research at the time favored a pleasing shape popularly called "teardrop" that, when properly applied, allowed an airplane of a given weight, frontal area and available power to fly faster thanks to reduction in what might be called form or shape drag. In part thanks to Geddes' book, the public at large began associating teardrop shapes with speed and modernity in general, and by the late 1930s utterly static objects such as pencil sharpeners were styled as teardrops or incorporated other faux-aerodynamic features.

In some cases -- I'm thinking of certain French sports cars of the era that I'll write about soon -- the results were pleasing indeed. So if teardrop became a design fashion cliché, it wasn't necessarily a bad one.

Below are Geddes designs from the early 30s, most of which were featured in Horizons. They seem impractical given what we have learned about aeronautics and engineering over the last 80 years. Nevertheless, they remain provocative and fun to look at.
Gallery

Motor Car Number 8
Geddes in Horizons: "Employing the principles of aerodynamics, I designed a motor car four years ago, and called it Car Number 5, meaning a car of five years from then. Working backwards in four stages, we succeeded, by the time we came to Car Number 1, in designing an automobile which, except for its extreme simplicity, would resemble present-day cars.... Each of the five models represent a twenty percent change over the previous one as each is advanced by degrees toward a definite idea standard...." Number 8 is one of a series representing "a further departure." Its exterior "is streamlined, other than on the ground side, to as near the drop form as is practicable. It is not designed for higher speed but for present-day speed with less power." At the front positioned between the wheel wells are a driver and passenger. Behind them are two rows seating three each. A small luggage compartment lies behind the last row of seats and in front of the motor which is behind the rear axle. At the extreme rear, including part of the fin, is the fuel tank.

Automobile patent model - 1934
This concept came after Horizons. I wonder why it needs eight wheels. 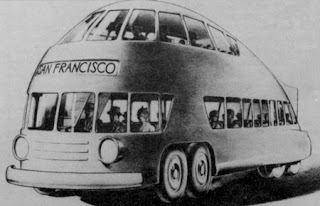 Intercity bus
Geddes noted that the bus "accommodates fifty-three persons, including a driver and steward. The lower deck deck seats thirty-three persons; the upper deck twenty. This seating capacity exceeds by twenty the average seating capacity of conventional buses with the same [250-inch] wheel and is greater than that in any bus of cubic content yet designed." Luggage is stored the the rear of the upper deck, the motor is mounted over the rear axle. 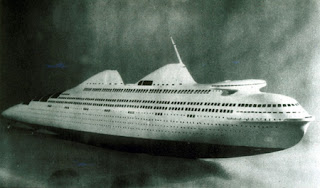 Ocean liner
"I have designed an ocean liner 1808 feet in length, with a molded depth of 120 feet, and approximately 70,000 tons displacement. Streamlined as to both hull and superstructure, it is designed for luxurious accommodations, economy of operation, and increased speed performance. It is a steamship that can be built and operated under existing conditions. Accommodations are provided for 2000 first-class passengers and a crew of 900 men....
According to calculations, this liner should not only be more economical to build and operate than the fastest liner now in service, but she should, in addition, cut transatlantic steamship time by about one day."

I must note that the Geddes length figure is surely a typographical error; diagrams in the book suggest a length of about 1,000 feet and the beam of 110 feet coupled with the 1,808 length yields an unrealistic length-beam ratio. Overall, the ship he proposes is dimensionally a trifle larger than the largest liners of the day. As for speed, the ultimate Blue Riband champion, the SS United States, crossed the Atlantic about 20 hours faster than the record when Geddes wrote his book, so his prediction was not out of line.

Air Liner Number 4
This was designed with the assistance of aeronautical engineer Otto Koller in 1929, so it was extremely radical in it day. Accommodations were for 451 passengers and a crew of 155. "She has a total wing spread of 528 feet. On the water she is supported by 2 pontoons 104 feet apart [approximately the wingspan of a typical World War 2 heavy bomber], 235 feet long and 60 feet high.... Total power required, 38,000 horse power -- 20 motors, each 1,900 horse power; maximum speed, 150 miles per hour; cruising speed, 100 miles per hour; normal flying ceiling, 5,000 feet; absolute ceiling, 10,000 feet; time of climb to ceiling, 1 hour; speed at ceiling 87 1/2 miles per hour; cruising range without refueling, 7,500 miles, gross weight, 1,275,300 pounds.... The flying time between Chicago and Plymouth [England] is forty-two hours. She is refueled in flight while passing over Newfoundland." A few pages later, he mentions that the plane would carry six extra motors and that it would take but a few minutes to exchange a bad one for one in good working order. As part of his conclusion Geddes states: "Air liners of a size that is not easily visualized to-day will eventually supplant ocean liners in intercontinental transportation of express traffic - passengers and mail, but not freight."

The last bit largely came true, though of course intercontinental freight of certain kinds is now transported by air. Another reasonably correct projection was the 450-passenger capacity. The airplane itself, while theoretically possible, could not have been built before the early 1940s -- this on the basis of the horsepower requirements. Whether the plane would have been aerodynamically sound, I'm not qualified to say.