The streamlined trains featured in Part 1 of this series were diesel powered. At the time -- the mid-1930s -- most American locomotives were steam-powered, so the easiest, cheapest means of hopping on the streamlining bandwagon was to give existing locomotives streamlined cladding. And that's what some major railroads did while waiting to convert to diesel power, a process that moved into high gear in the 1940s.

Two of America's richest and most famous railroads were the New York Central and the Pennsylvania Railroad. The key passenger run for each was New York - Chicago, linking the nation's largest and next-largest cities.

The Central ran up the Hudson Rive to Albany and then west to Buffalo along the route of the old Erie Canal -- a passage with few hill or mountain obstacles. From Buffalo, trains went near the south shore of Lake Erie through Cleveland and Toledo in Ohio before cutting across northern Indiana to Chicago.

The Pennsy's route from New York went through Philadelphia and Pittsburgh before angling northwest to the Windy City. Unlike the New York Central's route, Pennsy trains had to cut through the Alleghany mountains -- a series of sharp ridge-lines and intervening valleys -- making use of tunnels to minimize the amount of grade to surmount. Western Pennsylvania is also hilly with winding rivers, so those obstacles also had to be cleared.

Thus the Central had an easier route topographically, but the Pennsy had a shorter one -- no dog-leg up to Albany before striking west. This made the railroads competitive when hauling the rich and famous on their premier passenger trains, Central's 20th Century Limited and Pennsy's Broadway Limited.

Let's look at some photos:
Gallery 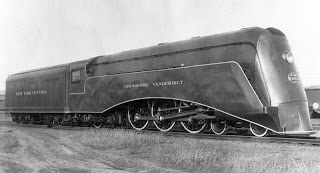 New York Central "Commodore Vanderbilt" - 1935
NYC's first steam streamliner was designed by Carl Kantola (with wind tunnel testing at Cleveland's Case Institute) and fabricated as a converted Hudson in the railroad's shops near Albany. The Commodore Vanderbilt was the second-string New York - Chicago run to the premier 20th Century Limited.

New York Central "Mercury" - 1936
This Hudson was given a streamlined cover by industrial designer Henry Dreyfuss. It served on NYC's Cleveland-Detroit run. 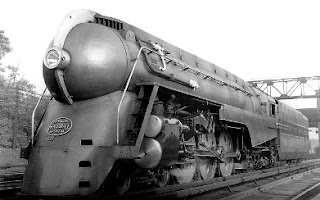 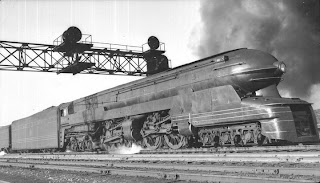 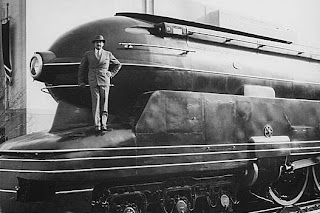 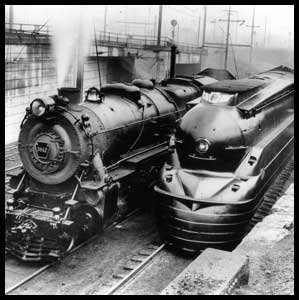 Pennsylvania Railroad S1
The Raymond Loewy-designed S1 was an experimental streamlined locomotive that appeared in the late 1930s. The center photo shows Loewy posing on his creation. The lower photo compares the S1 to one of the Pennsy's regular steam locomotives. 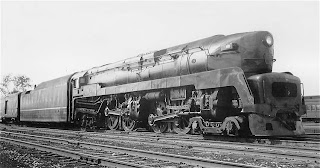 Pennsylvania Railroad T1
The T1 was another Loewy creation, but one that saw service starting in 1942. It was a cleaned-up version of a normal steam locomotive with an aggressive "face" that looks like it was not an optimal case of streamlining, though the rounded "splitter" form in front of the boiler must have had less air resistance than a regular flat boiler section did. The T1 was the last major steam-powered streamlined locomotive type built in America.