The great industrial designer Henry Dreyfuss (1904-1972) was especially concerned with "human factors" or "ergonomics" when designing a product. The idea was to made the item easy to understand and use. It also should be compatible with the physical dimensions and manipulation capabilities of the user. Finally, it should do its job well.

Vacationing at a fancy resort in the Hawaiian island of Kauai recently, I encountered something that failed on more than one of those criteria just mentioned. Here it is: 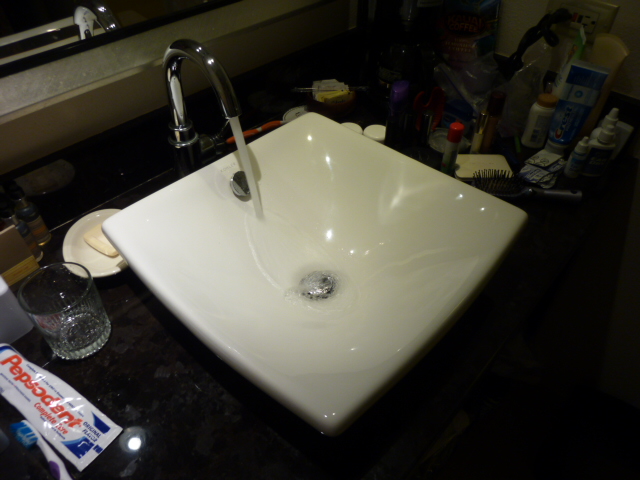 Apparently the resort refurbished its early 1960s-vintage buildings in the 1990s. Hotel rooms were smaller around 1960, so the modernization had to make do with available space. This was especially the case with the small bathroom area.

My problem had to do with the sink arrangement shown above. The style of sink that projects above the counter top was never my favorite, but it makes sense here. That's because toothbrushes, lipstick cases and other odds and ends can migrate under the sink's edge. The effect is to increase the usable amount of counter space compared to a normal sunken sink of the same size.

The failure has to do with the faucet. It doesn't extend far enough over the sink. Drawing a glass of water, brushing teeth, washing hands and all the other chores one does over a sink are harder and messier to do because the stream of water is too close to the side of the sink. Ideally, the water should fall near the drain hole rather than on the shallow slope of the sink's side.

So what we have here is a faucet design that's functionally not compatible with the design of the sink. One solution would have been to install a sink with steeper sides to better accommodate the water stream. But that would have meant a sunken sink and less counter space. The better solution would have been a faucet with a longer stem that would reach farther into the sink area. Maybe none were available at the time; I have no idea. Regardless, we were stuck with the result of decisions made years ago.