The Book is Completed 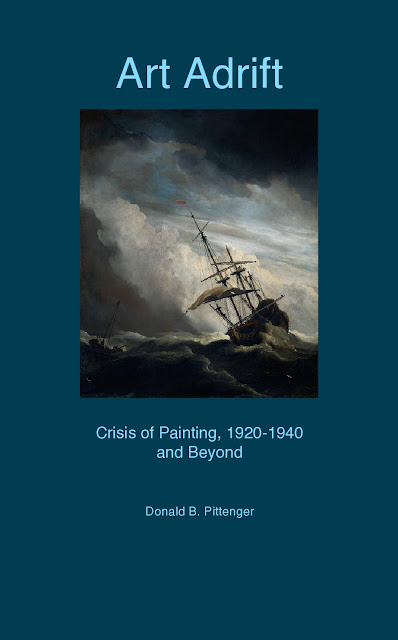 After more time than I care to admit to myself, I finally wrapped up my art history book and sent it off to Amazon as an e-book that can be downloaded onto one of their Kindles, an iPad, or certain other devices.

Back when I was blogging at 2Blowhards, I thought I would write about artists active 1850-1945 who were ignored by mainstream art historians. I would feature how and what they painted, of course, but I also wanted to treat how they dealt with the increasing influence of modernism. As it turned out, that concept wasn't really tractable due to the difficulty of finding the information I needed given the amount of time and effort I was willing to expend on the project. And given the advent of the Great Recession, the idea seemed like a long shot for acceptance by a publisher in any case.

I finally came around to accepting the notion of doing an e-book, even though that would mean sacrificing the richly-illustrated content that I originally had in mind. About that time I also realized that it wasn't just traditional painters who were having problems with modernism. Even famous avant-gardists had reached a point where they didn't quite know what to do next. This crisis happened around the end of the Great War.

At that point, everything clarified in my mind, and the actual writing of the book suddenly became a simple matter of grinding out the words, all 56,000 of them. Here is the blurb material I submitted to Amazon:

* * * * *
Art Adrift deals with a crisis of modern painting largely ignored in art history books. What happened was that modernist painters essentially stopped making major innovations by 1920 because nearly every alternative to the rejected traditional styles of painting had been tried. Yet it was believed by modernists that to become famous, an artist had to be creative in the manner of Picasso and other painters behind the art movements that bubbled up in the early 1900s. The problem of having to innovate when innovation was barely possible led to a period of comparative creative stagnation of the avant-garde between the world wars.

The 1920-1940 period also was one in which artists who were not originally modernist had to ponder how much modernism, if any, they needed to incorporate in their work in order to continue their careers. This added to the sense of drift and uncertainty in painting.

And then there were skilled magazine and advertising illustrators, aware of modernism, who had to deal with editors and art directors concerned that images be acceptable to the general public.

All this is brought to life via verbal sketches of dozens of painters and characteristics of their paintings.

This book begins by describing how modernism arose during the late nineteenth and early twentieth centuries in fields such as architecture and industrial design as well as in painting. A chapter is devoted to the modernist narrative of art history 1850-1920 from the perspective of 1960, when modernism and abstract painting were thought to be the end-state of artistic evolution. A complementary chapter describes what non-modernist painters were doing at that time, painters ignored in the other narrative. Chapters deal with the matter of creativity and characteristics of modernist paintings, setting the stage for most of the remainder of the book which deals with what happened between 1920 and 1940 in the world of painting. The final chapter treats the continuing lack of direction in painting from 1960 to the present following a brief period of domination by abstract art (something already tried as early as 1912).

* * * * *
In the final chapter I also hypothesize why artists moved into fields other than painting.

Due to lack of a large budget for permissions and the dangerous waters of copyright law, illustrations are restricted to chapter headings until such time as I can find a hardcopy publisher (if ever). So a fair part of the book is comprised of short introductions to painters along with brief discussions about what modernist stylistic elements they used or rejected. This is to build my case regarding innovation following the Great War. In the Preface, I suggest that readers resort to the Internet to view paintings of interest that are mentioned in the text. Not an ideal situation, but my main goal was to get some ideas out without waiting years for the ideal publication to appear.

If my subject intrigues you, take a look here and perhaps download the book. The price is $9.95 or its equivalent in other currencies Amazon deals in.