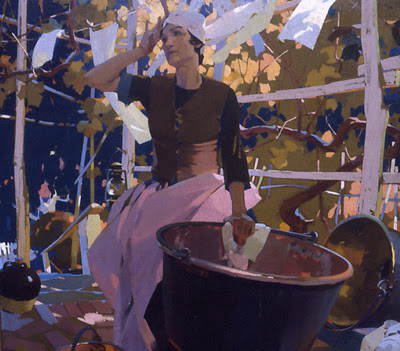 Based on the surviving fraction of his work that he himself mostly destroyed, I judge Walter H. Everett to be one of the very finest painter-illustrators of 20th century. I last wrote about him here.

Until fairly recently little could be found on the Internet. But Leif Peng recently posted some Everetts that I hadn't encountered before. Peng found them on Greg Newbold's blog, and Newbold mentioned that he had been trading Everett scans with Kev Ferrara. The illustration at the top of this post is from the group of "new" Everetts just mentioned.

Clearly I've been well out of the Everett image loop, so I hope that Kev or Greg Newbold will drop a hint as to where those images were found. Regardless, the images solidify my initial judgment regarding Everett.

Henry C. Pitz in his book The Brandywine Tradition characterized Everett as follows:

Everett was cocky and confident, short but broad and deep-chested, with knotted arms like a wrestler. He had a strongly modeled, dark-skinned, rather handsome and pugnacious face that seemed to threaten bad temper. All this left one unprepared for the eventual discovery that behind this manner was a vein of poetry. Although he possessed all the outward signs of a brusque man of incessant action, he was in his heart a dreamer -- a daydreamer, incorrigibly lazy....

All his best pictures, even those of banal subject matter, had some flavor of an imagined world. His people were believable but not ordinary. Most pictures had a secret place; a tantalizing area where nothing was explicit, but where the eye was coaxed to muse and speculate. He preferred tonal subtleties, close values, edges that were lost and then found again....

Yet he was difficult, for he hated deadlines. Things were put off until the last moment or beyond it. He loved the long indolent hours of dreaming about pictures he would paint and when the day for delivery arrived he would go fishing to avoid the insistent telephone calls. Editors, wise in his ways, planned to spend the last twenty-four or forty-eight hours before deadline in his studio while he painted furiously and surely... For once galvanized into action, he was amazingly rapid and certain -- a true temperamental virtuoso.

Everett was a student of immensely influential Howard Pyle who is best known for illustrations featuring pirates and Revolutionary War themes. 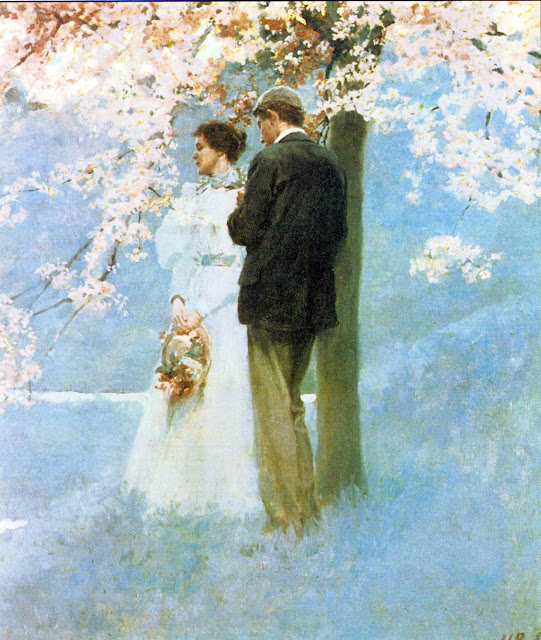 So the illustration above from the May 1897 Ladies Home Journal strikes me as unusual. Moreover, compare it to the Everett below: 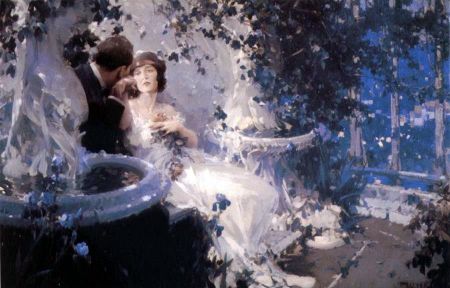 If the Pyle illustration had been painted around the time Everett was his student, I'd be wondering if the work was partly done by Everett, many of whose works are similar in spirit and also include blossoms. As things stand, it's possible that Everett was aware of that illustration even though he was 16 or 17 at the time it appeared in a women's magazine. Or perhaps Pyle has similar material to show his students while Everett was there.

(My source for the the Pyle publication date is Arpi Ermoyan's Famous American Illustrators, page 64.)