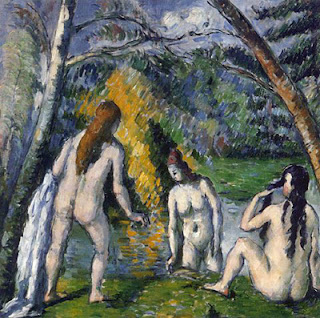 I'm working my way through this biography of Henri Matisse in a belated effort to find out why there was all the fuss about him. Pages 72-74 and elsewhere deal with his purchase of and relationship to Paul Cézanne's circa 1879-82 "Three Bathers" at a time when he was nearly broke. Despite his lack of money, Matisse arranged to finance the painting because he considered it very important to his own art. He kept it for decades as a constant source of wonder and inspiration. An on-line reference dealing with this is here.

For those readers expecting any kind of halfway rational commentary regarding the painting and Matisse's longstanding relationship to it, forget the idea. Yes, to a very limited degree I can place this in the context of the Standard Art-Historical Narrative of the Triumph of Modernism. But that's about it.

You see, I've never ever in all my years viewing and reading about art been able to understand either Cézanne or Matisse. In fact, I don't really like anything either one produced. That includes the Three Bathers painting shown at the top of this post: so far as I'm concerned it's a crude piece of art having nothing of interest to me.

Obviously my take runs counter to the beliefs of a lot of famous artists, art critics and art historians who do find what they consider wonderful things in the paintings of Cézanne and Matisse. Yet somehow I don't think that I'll ever be persuaded that the two were as great as claimed.

My best guess as to why Cézanne and Matisse were venerated by modernist-leaning contemporaries is that it had something to do with the art-historical context and the timing of the appearance of their various works as well as the modernist veneration of creativity as an end in itself.