There's a Norman Rockwell exhibit rattling around the country called American Chronicles: The Art of Norman Rockwell. It's currently playing in Tacoma, Washington, so of course I had to see it -- the goal being to reinforce impressions gleaned from seeing his works at the Norman Rockwell Museum. Not surprisingly, that museum is the organizer of the exhibit, because its collection of Rockwell's paintings and artifacts is comprehensive.

Years ago when I lived in Albany, New York, I drove across the hills to Stockbridge, Massachusetts, a charming town that was Rockwell's last residence. He was living there then, just around the corner from the Red Lion Inn; you could easily spot his detached studio near the house. There was a Norman Rockwell Museum even then. It was housed in ... a house (if my memory is correct: a house or another structure in or near the Red Lion). I went through it once, but at the time was out of touch with art and still in thrall of the modernism that Everyone told us was what was true in Fine Arts. Rockwell was considered a curiosity.

Setting aside the subject-matter, what one finds is a high level of technical skill. One aspect of this that impresses me is that this skill shows even though Rockwell had to do the actual execution (not including planning, reference photography, etc.) in a matter of days or perhaps a week or three to hit his deadlines. Contrast this with some of the Pre-Raphaelite artists who might labor for months on a single work.

One example that struck me was his treatment of a wooden chest of drawers that served as part of the backdrop to the main subject; the wood grain was very nicely handled and more detailed than other contemporary illustrators might have bothered with.

The title of this post asserts that Rockwell was a "colorist" -- to me, that means someone appreciative of color subtleties and interactions and who is able to include such in a painting. Fine Arts painters are most likely to fall into this category, but illustrators also can make the grade. Examples include Frank Frazetta, N.C. Wyeth and, of course, Norman Rockwell. 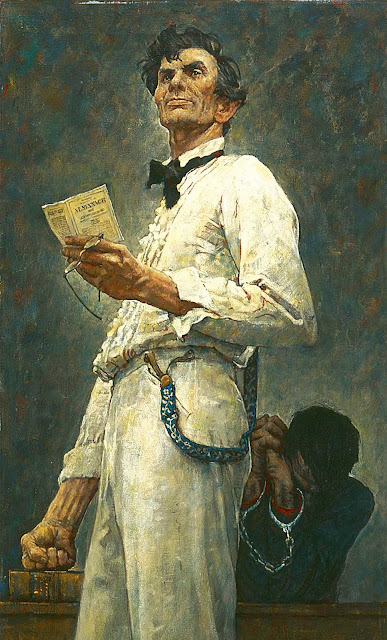 Lincoln for the Defense (click to enlarge and improve quality)
The painting shown above was part of the exhibit. If your computer allows enlargement, this can be done in two stages; after the first enlargement, click on it again and you might get an even larger view. Even if you are able to enlarge it, Rockwell's use of colors is still not as apparent as when viewing the painting in person. In the stage-two enlargement you might notice areas of dark red in several places, especially on the sleeve folds of his bent arm. In person, this red is much brighter and, in my judgment, unnecessary. Otherwise, Lincoln's skin and clothing contain many hues and not just the basic color.

Many of the faces Rockwell painted have bits of blue and green along with the expected variations around red-orange. I was often a little startled when a sort of turquoise kept popping up on subjects' skins. These subtleties often didn't make it all the way to printed magazine covers, so Rockwell clearly felt he had to do his artistic duty in full knowledge that his fans wouldn't be able to see all that he'd actually wrought.

Other items in his illustrations also were painted with traces of color complementary to the main hue, creating a rich appearance. For example, a large leather bag slung over a coachman's shoulder contains more dark green than tans and browns.

I could go on, but perhaps the best thing I can do is urge you to view some of Rockwell's originals. The best site is the museum in Stockbridge. If you can't get there, then try for the exhibit I've been discussing (the link lists locations following its Tacoma stand). And there might be examples of his work here and there; check the internet to discover if a Rockwell is nearby.