A rose may be a rose even if we call it a tulip. Nevertheless, be it by politicians or public relations flaks, there exists the practice of renaming things in order to affect how they are perceived.

Normally the hoped-for change is targeted at outsiders, but from time to time it's insiders who are intended to change perceptions with the change of name. Consider "garbage man" as opposed to "sanitation engineer."

A more art/design related case might be General Motors' renaming its Art and Colour Section as Styling Section and, later on, Design Staff. Of course work went on as before, regardless of the monicker.

I'm particularly amused by the last change because it implies that the staffers actually design an automobile from the tires up. This is clearly not so. Creating cars, like creating movies, is a team effort. In the early-stages mix for a totally new model are market researchers, product planners, engineers and the aesthetic specialists. In recent decades, even production specialists have been included to keep an eye on cost and ease of assembly. So there is no single "designer" in the sense of a 1903-vintage Henry Ford. Instead, we have a committee tasked with coming up with something as little camel-like as possible.

To me, "Styling Section" was the most descriptive name of the lot. That's because the guys with the Prismacolor pencils, airbrushes and (nowadays) interactive software systems are mostly playing around with visual themes rather than creating a vehicle from total scratch, unaided by non-aesthetic considerations. To be called "designers" is a means of improving self-esteem, the term "stylist" seeming oh-so-superficial.

Sorry guys, but fashion it is. Consider: 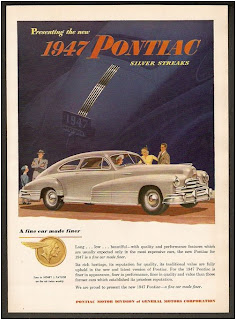 Above is an advertisement for a 1947 Pontiac. Note that it's a "fastback" model, a style popular from the end of the 1930s into the early 1950s. The concept was that the shape was more streamlined, or aerodynamically efficient, than alternatives -- the Platonic such shape being the so-called "teardrop" with a rounded front end that tapered to a point at the rear. More recent wind tunnel testing indicates that the taper isn't as important as first thought. But fastback cars were considered Hot Stuff for a few years until buyers began to realize that trunk space was limited compared to "notch-back" designs and sales dropped to the point where it wasn't worth the cost of tooling new fastback models.

Still, fastback cars have a certain stylishness, so from time to time one appears. In recent years, two major German car builders introduced such models. 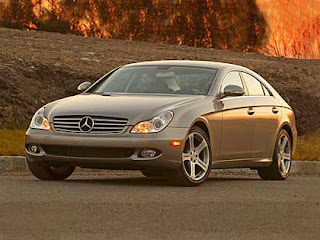 First was Mercedes with its CLS (above). I recall some critics pooh-poohing its looks, but it looked plenty sleek and desirable to enough buyers for the car to be a marketing success. Recently Volkswagen got into the fastback act with its Passat CC which basically plops the CLS roofline and windowing scheme onto a Passat lower body as can be seen below. 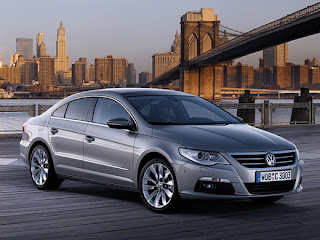 Is all this Design or is it Fashion pure-and-simple where an innovation is imitated by sales-hungry competitors trying to grab a piece of the pie. I give you one guess as to where I place my bet.