While on my gallery crawl along Palm Desert's El Paseo I came across some paintings that seemed very like the work of Joaquin Sorolla. But they weren't, of course.

Information on the plaque indicated that the artist was Giner Bueno (1935 - ). And a little Internet digging revealed (click on the link) that he, like Sorolla, was born in the Valencia area. This link notes that his father, Luis Giner Vallas, was a protege of Sorolla.

Below are some examples of Giner Bueno's work. 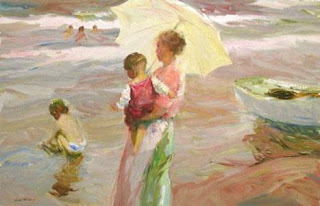 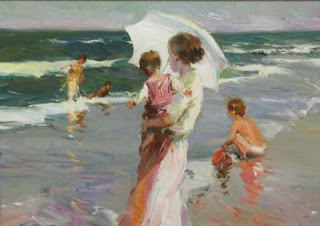 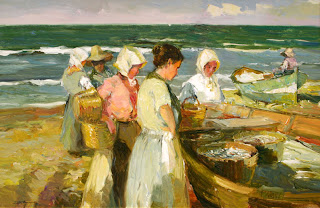 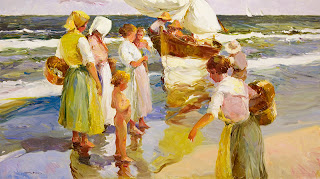 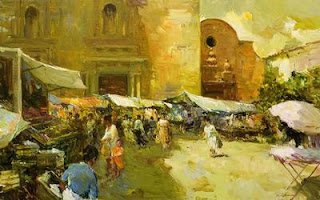 En Chelva
Giner didn't spend all his time on the shore. 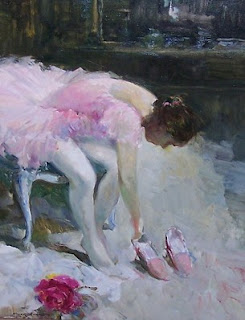 Las Zapatillas Rosa
And not everything he does are outdoors scenes.

[Scratches head, rubs chin] Oh dear. What to make of this. Well, the Giner Bueno paintings I saw were small compared to Sorolla's -- the latter's canvases could have propelled half the Spanish Armada.

Giner's paintings are competently done, and I'm pleased that a representational painter of his generation has made a successful career in the teeth of modernism. On the other hand, his work is just too similar to that of Sorolla for my taste; I see Giner and think Sorolla.

Then there is the Valencia factor, if indeed there is one, that might be called in Giner's support. I've never visited that corner of Spain, but can believe in the possibility that the scene is such that it can dominate any artist who attempts to depict it. Such is the case for California, where painters for the past 120-odd years have been producing paintings that are similar thanks to the subjects. (Though there is no California Impressionist whose work is dominant, unlike the case of Sorolla in Valencia.)