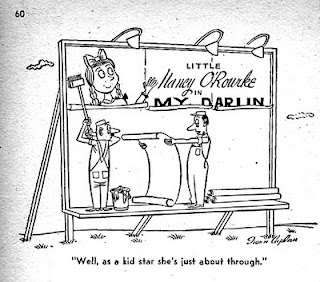 Irwin Caplan (1919-2007) was a well-known magazine cartoonist during the final glory years of the "slick" general-interest magazines. As his Wikipedia entry indicates, Caplan practiced a good deal more art and design than those cartoons. But it was the cartoons that most people knew about.

In the pre-Internet age it wasn't so easy to locate information about people, so that's why I was surprised regarding all his non-cartooning accomplishments when reading the link above. You see, I encountered him Way Back When.

I was majoring in commercial art at the University of Washington and one of the classes in that field was Fashion Illustration. And our instructor was ... Irwin Caplan, of all people: the famous cartoonist.

A slight problem I had with that was a lack of credibility: What did he know about fashion illustration? Perhaps sensing this, one day he brought in a newspaper clipping of a small advertisement for a blouse where the illustration was a wash drawing by Himself. He told us that even though the illustration was small, it was his and it got published, so he was proud of that.

That helped some, but we were most pleased when he brought in his buddy (and well-known local fashion and general-purpose illustrator) Ted Rand and his lovely wife for a demonstration. Oh, how jaded and snobbish we were in our student days!