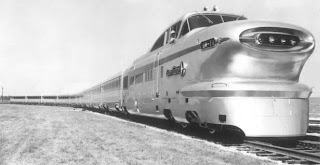 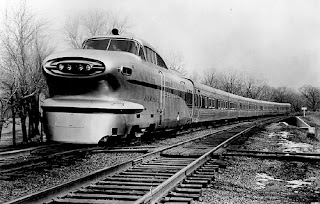 The photos above are of General Motors' Aerotrain, a mid-1950s attempt to put pizazz into rail travel and sell many similar locomotive-and-coaches combinations to America's ailing passenger railroads.

The Wikipedia entry here and this fuller account summarize the disappointing (to GM) tale of railroads that tried the demonstrator trains but refused to buy any production versions.

Basically, the Aerotrain was a flashy, automobile-styled locomotive pulling a string of coaches using some of the body stampings from inter-city buses GM was building at the time. By the way, that automobile reference is more real than one might think: the guy behind the design was Chuck Jordan, who many years later went on to head GM's styling operations.

The Aerotrain interests me because I actually rode one. I was a school kid at the time, and my dad bought a new DeSoto and we were traveling from Seattle by train to pick up the car at the factory. After stopping in Chicago to visit relatives, we took the New York Central to Detroit (the Wikipedia entry doesn't mention this run, the second link does), and lo! we got to ride the Aerotrain.

In retrospect, the best part of the trip was the green-uniformed, red-haired Southern stewardess who looked at totally blushing me with big blue eyes and asked if y'all needed anything.

The worst part, as both links mention, was the rough ride. An unusual suspension design is cited as the culprit. Maybe so. But I always thought the problem was that the bus-based coaches were simply too light. In any case, trying to walk while the train was at speed was difficult due to random lurching and bouncing.

Sometimes transportation concepts of the future have no future.