Perhaps it was aviation in the form of Schneider Cup racing airplanes that became progressively more streamlined during the 1920s (along with other high-speed aircraft) that made designer-engineers in other fields sensitive to the benefits streamlining offered in terms of increasing potential top speed and decreasing the amount of energy required to cruise at a given velocity.

As this Wikipedia entry indicates, operational streamliner trains began appearing both in Europe and in the United States by the mid-1930s. Though attempts were made to "clean up" the shapes of steam locomotives in the late 1920s, the early round of streamliners did not have steam locomotives; diesel was the engine of choice.

America's first streamlined trains that reached commercial use were the Union Pacific M-10000 and the Burlington Zephyr, both appearing in 1934 to great publicity.

The Zephyr had the engineer's cab at the very front of the locomotive unit, which placed the operators in grave danger in the event of a collision; the M-10000 had them placed higher and slightly more to the rear, a configuration found in most streamlined diesel locomotives of 1938-1960.

Another feature, shared by both designs, that didn't pan out was that the coaches were articulated, sharing a truck at each end rather than being coupled in the normal manner. This proved inflexible, so later streamlined trains returned to the proven system of joining coaches.

I find these early streamliners deliciously 1930s, and hope you enjoy the photos below and might even be inspited to do some Web exploring of the subject on your own. You can try clicking on most of the photos to enlarge. 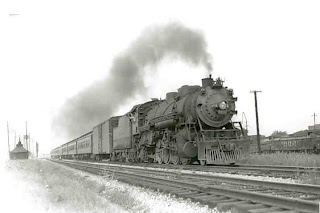 Pre-streamliner passenger train
This was photographed somewhere in Alabama in 1948. Steam locomotives were well on their way out by then, but I included this scene-setting photo because it could just as easily have been taken in 1930, before streamliners appeared. 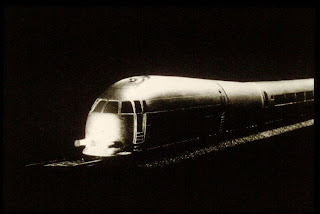 Locomotive No. 1, a Norman Bel Geddes design - 1931
Although Geddes' design was never actualized, it might have helped inspire streamliners that hit the tracks a few years later. 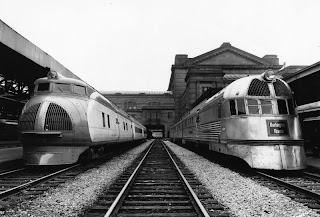 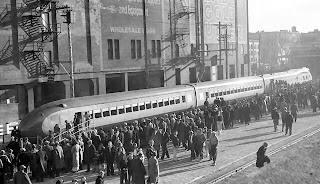 The M-10000 is open for inspection in Denver - 1934
This shows the rounded tail of the train. The Zephyr had windows at the rear of its final coach making for a popular observation area. 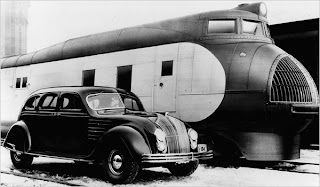 M-10000 and Chrysler Airflow - 1934
Streamlining was an idea whose time had come by the early 1930s. Chrysler introduced its at-the-time radically streamlined Airflow about the same time as the M-10000 hit the tracks. This publicity photo was intended to call attention to the similarity of the otherwise disparate vehicles' front ends. 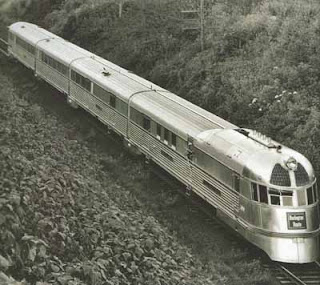