Asiatic Faces of the Fifties


Automobile styling has become considerably internationalized in recent decades. In the 1930s, 40s, 50s and even the 1960s American, English, French, German and Italian cars tended to have a national "look" or flavor. (Yes, I can cite exceptions, but I hope you can see my point.)

Nowadays young people from automobile-building countries can attend design schools in the USA, England and the continent, receiving comparable training. That is, the outcome is approximately the same regardless of country of origin or country of school. If a car design turns up with a strong national character, that's because it was the stylist's intention. A case in point was the original version of the Audi TT sports car which was styled by an American, yet somehow evokes German racing cars of the late 1930s.

National character was apparent in Asiatic vehicles of the late 1950s. Since few were exported to America and Europe, readers might not be aware of that was going on at that time and place, hence this post.

The Japanese automobile industry didn't begin taking off until the mid-1950s. Its cars were often derived from English models, and the designers were probably mostly home-grown. The result for a few years was cars with curiously fussy front ends. I say "curiously" because traditional Japanese architecture and painting tends to be rather spare and simple.

But -- who knows? -- I might well be totally wrong about all this. So give the pictures below a peek and decide for yourself. 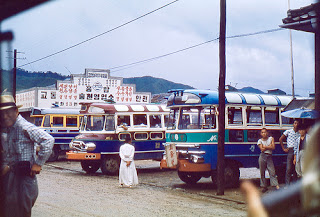 Korean buses at Hongcheon, 1960
I found this image someplace on the web and was glad I did because it shows Korean buses as I remember them from my army days. Note that each one has a fussy grille that differs from the others. These grilles were probably cobbled together at the assembly point without the input of a trained designer. 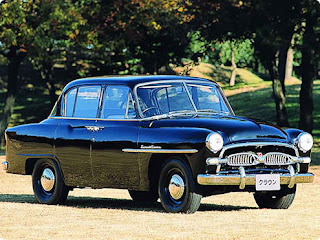 Toyopet Crown
This is a Toyota from the mid-late 1950s. Whereas the grille design in general isn't greatly at odds with European or American styling practice of the time, its proportioning and execution are awkward and a tad fussy. 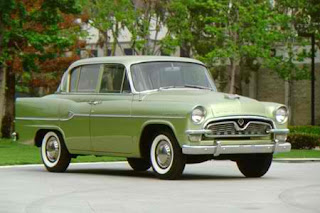 Toyopet Crown from the same era
The front end of this Toyota is tidier, but the design elements strike me as over-detailed for a car of its small size. 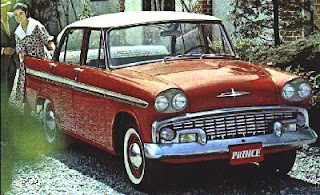 Nissan Prince Skyline ALSI-2 from around 1958
Another awkward design. Here we find round and rectangular elements that fight each other -- in particular, these round lights at the outer edges of the grille butting up against rectangular lights.