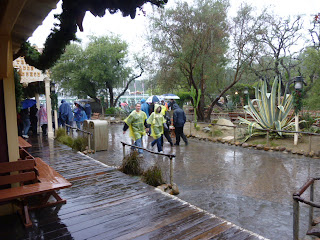 Most folks expect noontime at Disneyland to be bright and sunny, I suppose. Alas for them, Southern California does have a rainy season during the winter months. The weekend before Christmas and early Christmas week this year, Los Angeles experienced days of rainfall that at times was very heavy. And we were there.

Given that I get to Disneyland about once per decade and further given that things in the park change slowly, I was able to skip most of the rides and focus on something really important: staying as dry as possible.

It turned out that a nice place to avoid the rain is the ten year-old Grand Californian Hotel in the Downtown Disney area just west of the Disneyland and Disney California Adventure Park entrances.

There are other Disney hotels nearby that are basically near-generic, nondescript modernist style with Disney touches and shops to brighten things up. Not so the Grand Californian. It's based on those fine Arts & Crafts style National Park lodges at Yosemite in California and here and there elsewhere in the West. Here are some photos I took while drying off. 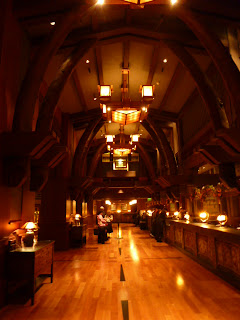 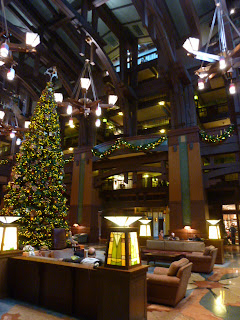 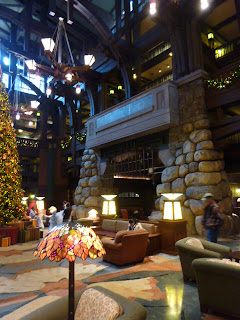 These views are of the registration desk area and the main lobby. 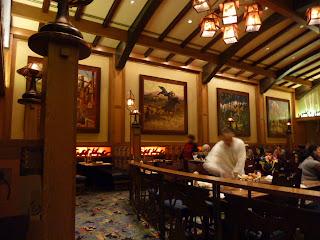 This was taken from a seat in one of the hotel's restaurants, one with a story-telling theme. 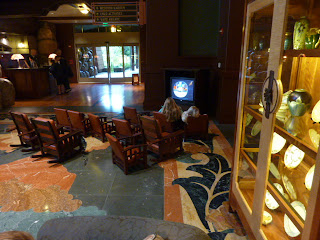 One corner of the lobby has a children's diversion area: note the scaled-down Adirondack-like chairs and rockers. 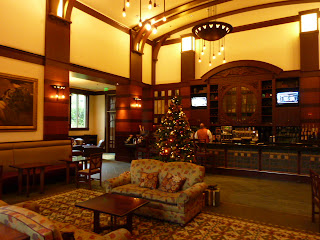 Grownups are not forgotten. This is a lounge where one can get coffee and beverages of increasing hardness. Those little white spots near the rim of the ceiling light fixture are three-circle Mickey Mouse symbols (head and two round ears): there's no escaping the mouse on Disney property, even in a lounge mostly for adults. Also note the painting on the left-hand wall. This room has several paintings with a circa-1900 feeling, including: 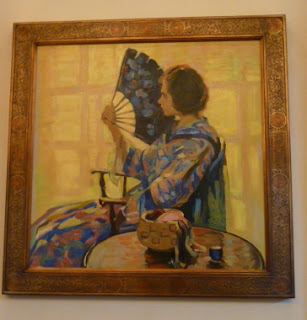 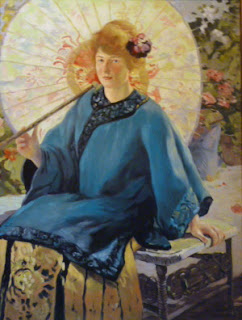 The latter image is slightly cropped. 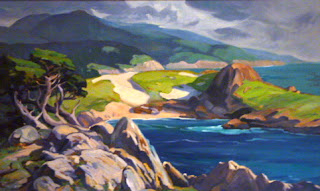 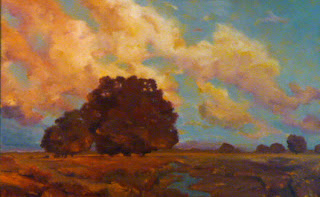 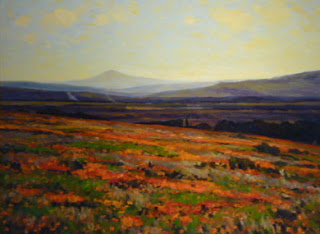 These are slightly cropped images of some of the California Impressionist style painting located along corridors in the hotel.
All those paintings shown above bear no artist signature. My guess is that they were done by Disney art staffers, many of whom are no slouches and fully capable of creating works with a 1900 cast.