A Lot of Picasso Goes a Short Way 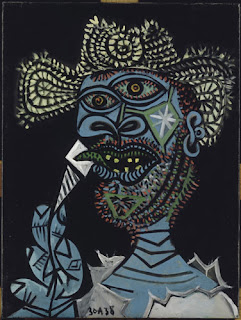 Man with a Straw Hat and an Ice Cream Cone - 1938
The Seattle Art Museum has been running an exhibit of Pablo Picasso works from the Musée National Picasso in Paris. It's a larger-than-average show for the museum and they've promoted it heavily.

My wife has been gently hounding me to take her to see it for some time now, but we've been traveling a lot and only got around to doing the deed yesterday.

Crowds were large. I'd assumed that we'd simply waltz in, wave our museum membership cards at the ticket desk and then troop through the exhibit. Instead, we had a two and a half hour wait before our appointed entry-time slot. A chat with a museum staffer revealed that it was the holiday season (and perhaps the impending January 17th show closing) that was bringing in the masses.

When our turn finally came, all I could manage was a fast walk-though, pausing only in the section featuring photographs of Picasso, his women and other friends. The paintings and sculptures ranged from at least his Blue Period through the rest of his career, including the painting at the head of this post. I didn't notice very early works (which I'll be writing about soon).

Contrarian that I am, I can tolerate Picasso only in extremely small doses. Even the small-ish Picasso museum in Antibes, France was an overdose so far as I'm concerned. What I saw in Seattle was room after room, wall after wall of what I consider truly awful, pointless doodling. Doodles that, thanks to the public relations genius of Picasso and perhaps his art dealers, were often quickly painted with the potential for easy sales at good prices -- a situation beyond dreams for most artists.

Finally came the moment of climax and revelation. The Picasso exhibit's exit happened to empty into the museum's small collection of 15th - 18th century art. From crude, distorted Picasso, viewers confronted images that they could relate to as human beings -- setting aside any matters of artistic quality.

So why was there such a large crowd? Did most or all the attendees genuinely like Picasso's works? Did they come simply because Picasso is famous? Might they have come because -- formally or informally -- they acquired the notion that Picasso was A Great Master Who Must Be Loved -- Or Else! (I kid about the "Or Else." Sort of.)

It's possible that there have been studies dealing with art appreciation and how people with different degrees of art knowledge come to their current tastes. Perhaps I'll make time to do a Web search on this or maybe a reader already knows and might post a comment. In my case, Picasso was an artist that "everyone" (who counted, based on my reading when I was high school and college age) asserted had significance and greatness. So I bought into that perspective even though I found only a tiny number of his works likable.

I finally came to trust my instincts, which is why I hardly paused during my stroll through the rooms of the Seattle Picasso show.