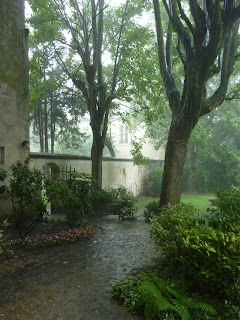 I took the above photo during a heavy squall just after leaving the main building of the Musée de Montmartre last month. The background structure houses exhibits and was the former home of artists such as Suzanne Valadon and her dysfunctional son Maurice Utrillo. The museum's Web site is here and a brief history here.

Montmartre was the center of Paris' bohemian-artistic crowd during the final decades of the 19th century and first few decades of the twentieth, when Montparnasse gradually usurped the avant-garde crown.

Although I've visited Montmartre perhaps half a dozen times over the years, I never bothered to visit its museum. Perhaps I figured it would be some kind of tourist trap. Too bad for me. I finally toured it in June and found that it was entirely legit and had several items of exceptional interest. Let me add that it helps if a visitor has more than passing knowledge of Parisian arts and culture of the era featured in the exhibits.

In the center of one room was an encased model of the district with small flags indicating where well known artists, writers and other notables lived. On a nearby wall I found...

Parce Domine - Adolphe Willette, c.1884
This large painting once decorated a wall at the famous Montmartre hangout Le Chat Noir.
Another item of interest was what supposedly was the only known nude photograph of Valadon. She got her start as a model for artists including Renoir before becoming a painter herself. The image was certainly impressive, though I wasn't completely convinced that it was really of Suzanne. Her lower face has a pinched look that became progressively more distinct as she aged. I found this hard to detect in the photo, though it's possible the look was less prominent when she was, say, 20 years old.

A good reason for you to journey to Montmartre to see for yourself.