In 1955 when I was a teenage car-stylist wannabe, a new book (cover image below) appeared on the market. It was filled with helpful tips and packed with examples of concept sketches and renderings by professional stylists and advanced students. I still have my copy. 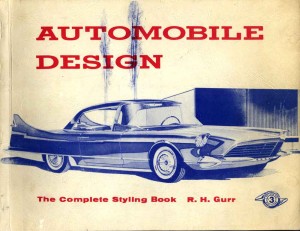 So I was pleased to stumble across a post concerning it on the Dean's Garage blog. The illustrations shown here were pulled from that post, but I strongly urge interested readers to click on the link and scroll down to where links to other illustrations can be found.

The book was strictly monochrome, so color versions of the art (such as shown above) are sorely missing; nowadays such a book would have color. Some illustrations are simply workman-like and a few are beautifully done -- especially those by Richard Tatge who did the red turbine car. As a group, they are an interesting sample of styling ideas from the early-to-mid 1950s. 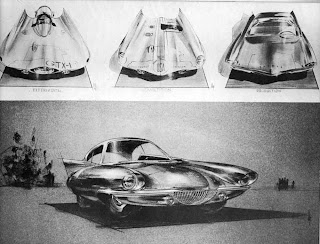 Tatge illustrations showing how a turbine-powered racer might be tamed into a street-ready production job. 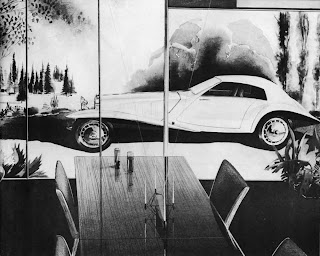 Another rendering that's probably by Tatge -- this, a fine, early taste of "retro." 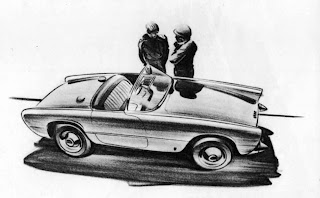 The book's author, Robert Gurr, was not a flashy renderer. This is one of his nicer sketches.

Aside from Tatge, most of the stylists whose contributions were in the book were good at rendering cars but not proficient at human beings. A few human figures were little more than poorly done diagrams. Interestingly, Tatge never seemed to have made a mark either in styling or related fields such as illustration if a recent Google search on his name is any evidence.