Something often downplayed or even missing in modernist architecture is consideration of the psychology of people who look at or use a building. This is in contrast to the Beaux-Arts style architectural training where students created renderings and building designs that evoked moods.

I was reminded of this not long ago strolling through the campus of the University of Washington when I spied this: 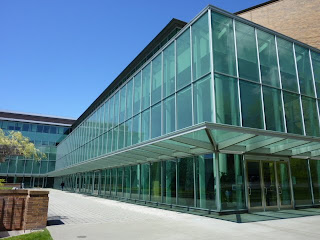 Law School building
It's situated near the campus periphery where newer, non-Collegiate Gothic architecture reigns. What struck me was the entrance area. Yes, once inside there is a large, high space with plenty of glass. But the doors themselves look like they came from a parts bin. The Great God Functionality worshiped by modernists would smile at form following the function of ingress and egress. But largely lost are the psychological functions of transition and perceiving the importance of the structure being entered.

What follows is a swing around the Washington campus showing entrances old and recent to illustrate my point. 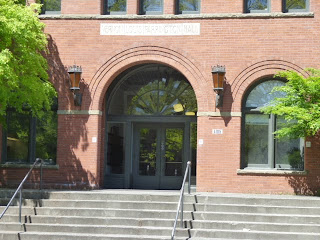 This is one of the older buildings, named after Vernon Louis Parrington who taught at Washington in the early decades of the last century. The building predates the university's Collegiate Gothic phase and is undistinguished, as the entrance suggests. 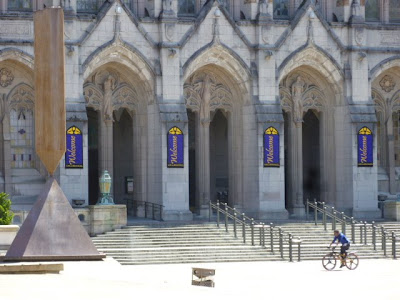 Here is the main library building's front; there is no mistaking that this is the entrance area. The doors themselves are hidden at this angle, but are heavy, wooden, and have glass panes. Multiple doors are present to serve times of heavy traffic. 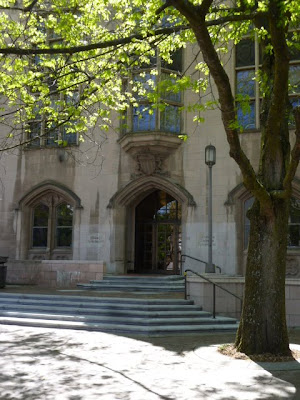 Nearby is the administration building, constructed in the late 1940s. It differs from most campus buildings in that it has no brick surfacing. A much more modest entry, but it is attractively designed aside from the University shield squeezed between the entrance frame and the bay window section above. 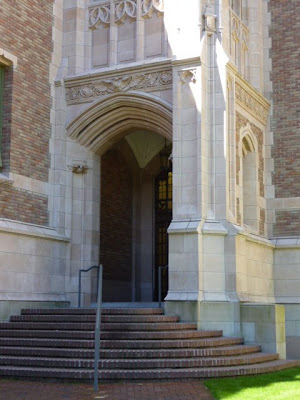 This isn't a main entrance. It's a side entrance placed where two wings of a building join. (Actually, the two present wings once were separate buildings that were consolidated several decades after they were built.) Unlike most modernist solutions, it possesses charm. 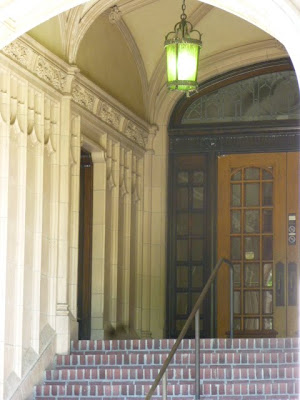 Here's an entrance to another building on the main quadrangle. It gives one the feeling that you are really entering a dignified place. 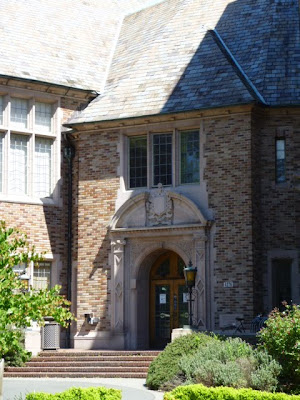 This is the entrance ensemble of what once was the womens' Physical Education building, now home of the Drama School. It's clearly an entrance, and clearly has a dignity to it.

So much for buildings mostly from the 1930s and 40s. Now for more recent doors and entrances. 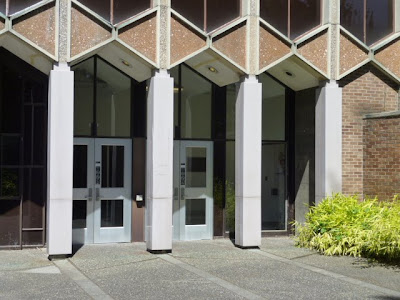 Built around 1960, this Engineering building is one of the ugliest on campus. An effort was made to create a transition zone of sorts, but it doesn't succeed. The doors themselves are nondescript. 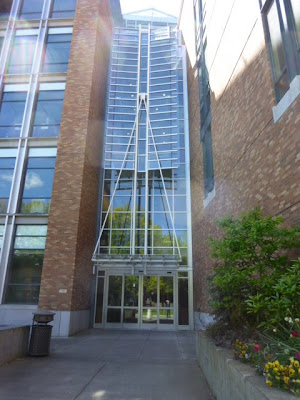 Another set of nondescript doors, this time on the Electrical Engineering building. All that glass and metal above the door is intended to create the sensation of ... well, I'm not sure. 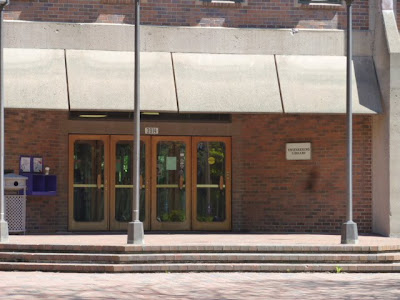 The Engineering Library entry, like the rest of the late 1960s building, is a feeble attempt to blend modern with traditional. 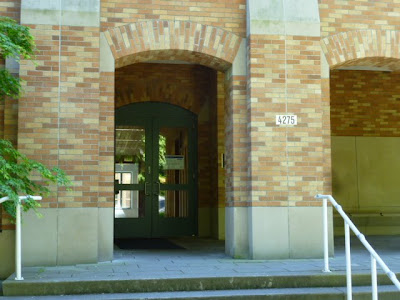 Here's another blending attempt, this from the mid-1990s for one of the Business School buildings. Because it edges more towards the traditional, it strikes me as being more successful.

All of which is not to say that modernist and various breeds of post-modernist buildings can't have doors and entrances that have psychological resonance. But it takes some effort on the part of the architect, particularly one invested in classical International Style design.